Musings on the ASAN Celebration

I know I'm a bit late posting this, but I was processing my thoughts, as well as juggling many things.  This morning is pretty much the first chance I've had to sit down and write it all out.

I remember when I first came online into the greater Autism communities, ASAN was one of the first groups I encountered.   It's been a bit of a shock to realize that it's only been in existance for 5 years, when it feels like it has been around for so much longer.  Five years is both a long time and a short time for non-profit organizations, and is one that is significant because it not only is a matter of surviving, but it shows that there is a need for ASAN to exist and to continue existing.  The day in which we no longer need the ASAN will be bittersweet, since it will mean the end to ASAN, but it also means that ASAN and other disability rights groups has succeeded, and both Autistic people and disabled people are equally included in all matters concerning us.

Today, however, is not that day.  On Wednesday, November 16th, I celebrated ASAN's 5-Year Anniversary, in Washington D.C.

I have to admit, I am honoured that I was invited to attend the event.  I've always looked to ASAN for inspiration on the type of impact I'd like to make.  However, for me to do the work that ASAN does is a bit daunting.  Thinking that I don't have the expertise or knowledge to work on a governmental level (at least yet), I've decided a long time ago to do what I can, to work on a more individualized and community level, doing talks with my local organizations, talking with other Autistics, our parents and support workers, and blogging.

It is this decision that has led to this blog, as well as to my other contributions around the internet.  This decision also led me to Autistics Speaking Day.  Over the few years, I made contacts with other Autistic individuals and allies who shared the same views.  I have never claimed to speak for everyone on the Autism spectrum, declaring that "I speak for me!", and yet I found myself surrounded by people who said "I agree with what you said."   And at the same time, I encountered people who said "I hadn't thought it that in that way; you have changed my mind. Thank you."

I felt encouraged.  Even though it might have been just a little difference for someone else, I feel like what I do has worth and that I am capable of making a difference. I felt empowered, that maybe all these little differences will add up and I'll be capable of reaching a lot of people one day and making a big difference.  And so I continued.  I read things, I responded and wrote things.

And then I came across Communication Shutdown.  Because of the previous decision I had made, and the empowerment I had gained from that decision, it was an easy decision for me to come up with Autistics Speaking Day. I didn't even think about it, really, I just thought something needed to be done, grabbed a name at the top of my head, and put it on my blog.

I don't think I ever imagined the kind of effect that Autistics Speaking Day would have.  I've kinda gotten used to working on a small-scale that the concept of Autistics and allies from all over the world would participate still stuns me.  It was an accident, a very happy accident, from what I gather as I read all the wonderful things written about Autistics Speaking Day.

When I got the email from Kathryn about going to Washington for the award, at first I wasn't sure whether I could or whether I should.  While I had dedicated my time to Autistics Speaking Day, and I acknowledge that it was my idea that started everything, I've been a little uneasy about taking much credit for it.  Maybe it's lingering self-esteem issues, or my upbringing to be as modest as possible, but I don't really consider Autistics Speaking Day as mine.  To me, it belongs to every person who contributed blogs, read posts, tweeted about and did anything to do with Autistics Speaking Day.  To me, it belongs to the community, so it felt a bit wrong of me to take a substantial amount of credit for it.  It felt like a mixture of egotism and a bit like super-crip-ism.

But then it dawned on me on where the award was coming from; this is the ASAN, an orgranization created by Autistics, run by Autistics, for Autistics and cross disability issues.  These were people that I had been talking to, blogging with, signing petitions and protesting with since 2009.  These are my people, saying that what Kathryn and I did, what I imagined and put forward to the community, has worth and made a significant impact to our community.  It's that acknowledgement that means a lot to me.

So I went to Washington, all nervous and excited.  I heard Ari speak live for the first time, passionately and powerfully about the need for Autistic people to be involved with matters that concern us.  I felt myself inspired, recalling the motivation and determination that has kept me blogging these past amost-three years.  I accepted the award, and thankfully didn't stumble over my little acceptance speech too much.

But you know what the best part of it all was?  It was meeting my people, Kathryn, Savannah, Ari, Melody, Lydia, Stimey, Lori and Karen and all the others who are my community.   It was the best time ever. 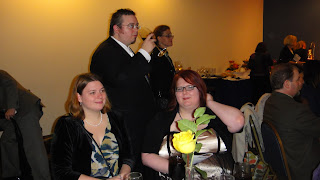 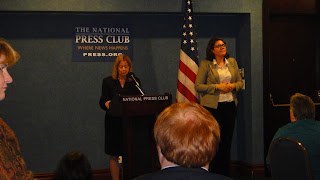 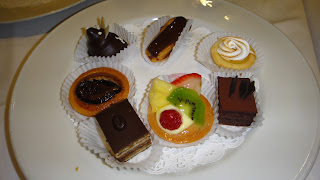 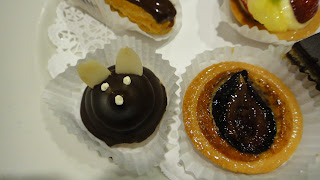 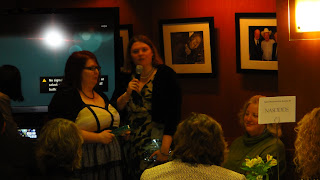 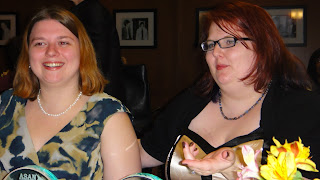 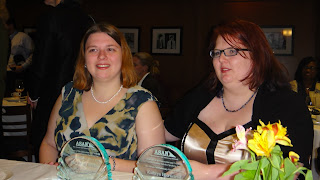 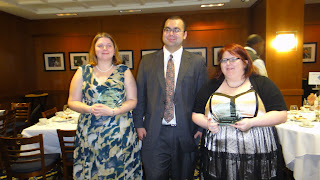 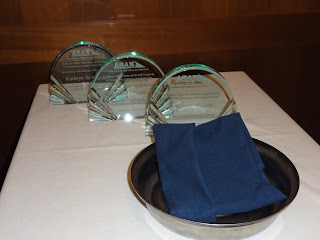 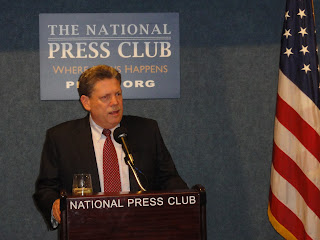 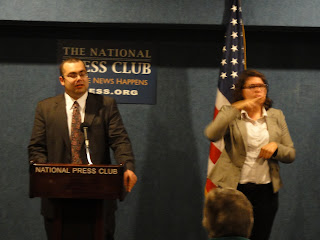 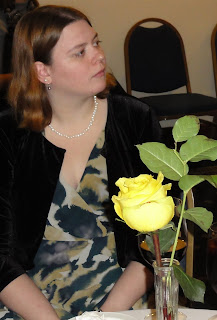 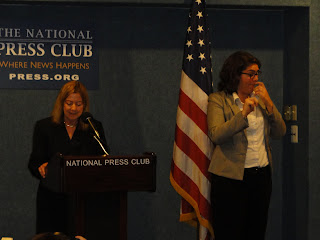 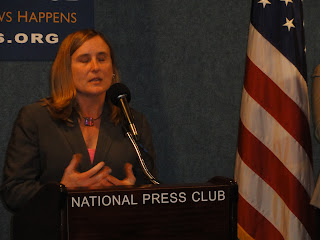 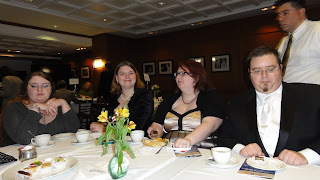 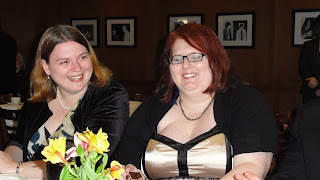 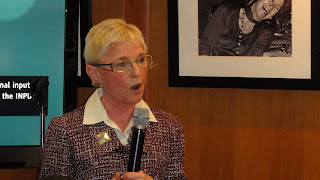 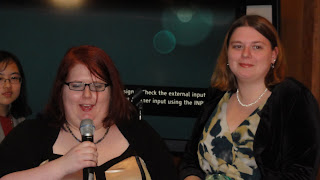 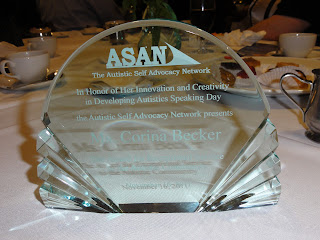 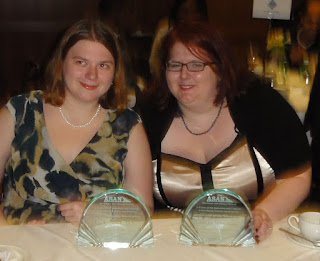 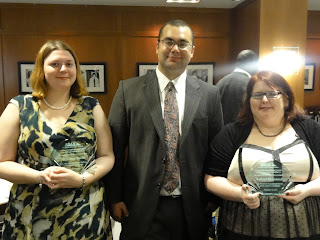 This is going to be a short post; I've written a more extensive article for the Autism Women's Network on this that I need to just finish editing before it goes up.

Most to the time when I come across the terms high-functioning and low-functioning, they are used as descriptors for Autistic people, whether well-meaning or as a way to dismiss Autistic opinion. However, at the time of writing this, the last time I had it directed towards myself directly was in a conversation just a few days ago at a store I go to on a weekly basis. For context, the staff at this store know I am Autistic, ADHD and some of my various other disabilities. They also know that quite a few other regulars also are on the spectrum and have disabilities.

I was talking with one staff member and the topic of disability came up, Autism amongst my family members in particular, and how some of them aren't diagnosed even though we're pretty sure they're on the spectrum, with some comparison to my own rather belated need for a diagnosis. In response, the staff member replied "well, you're pretty high-functioning yourself, right?"

Knowing that she didn't know how quite loaded that term is for me, and she didn't mean to step into the "but you don't look disabled" fallacy, I attempted to explain it's not a constant state (I don't know about how well I came across; i had a migraine and had just worked a 7-hour retail shift, was hanging on with the last of my batteries and my last remaining spoons). As I did so, I came to understand something, what people really mean by high- and low-functioning.

It's not about vocal skills or IQ scores, as I've seen proposed in the Autism communities, or frequency of symptoms and self-harming behaviour, as defined by the Global Assessment of Functionality. It's about visibility.

Think about it; that's what really is meant when people label functioning status to disabled people, the level in which the disability is visible to other non-disabled people. A person like myself, whose disabilities are largely invisible due to the nature of my disabilities themselves and the work I put into surviving outside my safe space, is more likely to be automatically considered "high-functioning". This is because unless I let people in and show others my private life, my daily struggles, the moments where I'm not working on "passing", people have no idea how much that label is inconsistent with my actual reality and a lot of times, a lie. In the paraphrased words of a few of my friends "it wasn't until I lived with you that I fully understood the impact and implications of what you told me what your life is like; until then, I thought I knew, but I didn't."

Autism is already an invisible disability, being that by clinical definition, it is a developmental disorder, a mental disability, not a physical disability. This means that unless we are very visibly Autistic, most people have no idea that we're disabled. Someone who is highly visible as being Autistic is more likely to be considered "low-functioning", and treated with all the stigma that entails, due to sheer ignorance. There is, of course, problems with both scenarios, based on assumptions made about disabilities in general and functioning labels on specific.

As part of the Autism and Disability rights movements, I think we should be correcting the terms. Let's call out the fallacies in functioning labeling, and call it what those descriptors really mean, highly-visible and highly-invisible disabilities. This way, not only are we rejecting the assumptions made about us, but we're also confronting ableist attitudes hidden in the words used to describe us. It makes clear that what they're using to divide and label us is false and superficial and makes it uncomfortably clear on what they really mean. Maybe then we can change more minds on how they treat us.

Edit: Of course, there are problems with the terms highly-visible and highly-invisible, in that there are also times when someone is more visibly disabled than others.  This certainly isn't going to be the ending solution to the problems with high-/low-functioning labels.  However, I think it's a step towards confronting non-disabled people on what exactly they mean by those labels and the underlying attitudes that are expressed.   It's a step towards addressing the ableism behind it, so that we can work on descriptors that are more accurate and are still respectful of every disabled and Autistic person.
Posted by Corina Becker at 11:19 AM 10 comments: