Response to Review of Social Assistance

In Ontario, the Social Assistance programs are under review.  The Commission involved is in charge of "examining social assistance in Ontario through engagement, research and analysis to provide the government with a concrete action plan to improve the system for the people who need it."

There are comment and response forms for people to reply and contribute, found on the Commission for the Review of Social Assistance in Ontario website.


Being a recipient of ODSP, I contributed my own comments, as seen below:


When determining social assistance rates, the cost of living needs to be considered.  Depending on location and the fluctuation of the economy, the cost of living changes.  In such cases such as the present, when the cost of living rises, so should the rates in order to ensure that recipients are able to afford necessary items such as food, clothing, rent (which for any higher quality of life is much higher than the amount given for rent with ODSP), as well as be able to pay the bills.

As a recipient of ODSP, I find it a challenge to find work that makes it worth the deductions from social assistance.  Part of the problem is that it seems that the deductions are taken off with the assumption that any income we make in the previous month will be used for the next month.  I can tell you that it is not.  Often, because ODSP does not adequately cover all the costs of living, recipients who are working use income in the same month that they earn it.  This means that there is no saving for the month ahead, and the deductions actually serve to create a cycle of debt and poverty that is increasingly harder to break.

Also, with the current economy and job market, it is extremely difficult for persons with and without disabilities to get a job that would lead to coming off of social assistance.  The amount paid by most jobs available are not sufficient to take the place of the deductions in a person's social assistance and so there is a constant need to find a better job, leading to an inconsistent history of employment, as well as an increased risk of a person burning out and becoming depression and/or further disabled mentally.

By the time a person is able to find a decent paying job that does not cost a huge amount of emotional stress and is able to gradually have social assistance withdrawn, the person is in quite a bit of debt due to the cycle created by earning deductions in social assistance. In such a situation, it is near impossible for a person to save for the future, either for needed items for a new job, or items to enhance quality of life, or to put towards miscellaneous costs such as over the counter flu and cold medications as well as other medical costs that are not covered by benefits, or towards retirement in old age.

The Registered Disability Saving Plan is an attempt to allow persons with disabilities to save towards their old age, however, there are some concerns about being able to get accounts registered.  For accounts to be registered, a person must have the Disability Tax Credit, which has a different definition and set of requirements than ODSP.  What is puzzling is the mix of seemingly specific yet vague criteria needed on the applications.  What is needed is a standardized definition of disability so that ODSP recipients applying for the tax credit in order to register their RDSP is able to be approved and thus be granted financial security for the future by saving what they can afford from jobs, especially if they are able to get jobs that just barely gets them off social assistance but not improve their quality of life.

What is also problematic is how education is handled by ODSP.  ODSP is suppose to not deduct earnings if a recipient is taking post-secondary education classes.  However, there are times in which earnings are deducted despite the recipient informing and even providing documentation of their student status.  This is especially the case during the summer months, when there are also classes available for students.

Between being unable to save for the future, and being unable to save for post-secondary education that may especially prove to lead to higher-paying employment, ODSP often hinders the efforts of recipients to gain adequate employment to no longer require social assistance and be able to improve one's quality of life.  Rather than aiding people, social assistance as it currently operates perpetuates and increases poverty conditions for low-income persons, families and disabled people.

Posted by Corina Becker at 7:39 PM No comments:

Whew!! Things have been busy for me this summer!

I'm currently working on an essay on violence and disability for school, an article on functioning labels for AWN, and a piece on self-definitions of recovery for here.  Some of them, just when I think I have all the materials I need to finish them, someone mentions some very good resources that make me rethink some of my points or what to include more information.

However, I'm also getting ready for Autistics Speaking Day 2011.  It was an overwhelming success last year, with such a small amount of planning and advertisement.  I'm excited to see the results of this year.  I've read some of the responses to ASDay last year, and it's been incredible!! I am still blown away and amazed at people's responses.

So we're doing it again!!! We're a little bit more organized this year, got our Facebook event up in advance, and Kathryn and I have started an official blog so that we can compile everyone's contributions in one spot.  It's still under some work, but it's up and running!

We're also going to be looking for people to help us out.  Last year, we were a little overwhelmed by the flow of blogs.  Kathryn was incredible being able to keep on track of everything on Facebook, and I had my hands full on Twitter.  We'd like someone who is fairly familiar with social networking sites to help us out.  But more on that later. 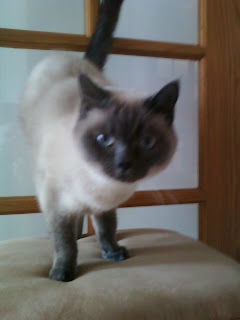 If you see my twitter and Facebook being flooded with pictures of a little white cat, it is because today Yeti is being put down.

Mom and dad say that she wasn't feeling well, not eating or drinking. They took her to the vet. Turns out all her organs are shutting down and she's dying. The vet can only make it happen painlessly and quick.

So afterwards, we're bringing her back home and laying her to rest amongst the roses she loved so much, by the house. 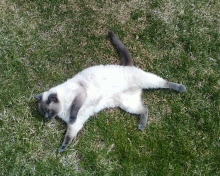 I remember bring Yeti home for the first time. It was after Lunamus died, we had gotten used to being a two-cat house. And we wanted a cat that would mentally stay young. So mom called all the pet stores and requested to be put on the notification list for simease- cross kittens.

I was walking home from high school, in my kilt and rowing jacket, when mom and Loren pulled up. "we're picking up Loren's cat," they said, and I got in. We were the first to respond, so we had the pick of the litter. And so we got the prettiest, more playful girl there. 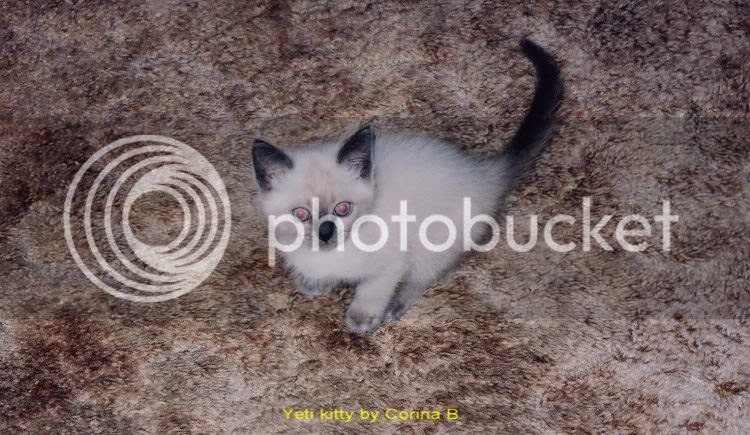 She would climb up curtains and furniture, so Loren named her Yeti. Since I had Nibbles, an older cat that didn't like the young kitten, Yeti stayed in Loren's room for the night until Nibbles got used to her. At Christmas, she'd climb up the Christmas tree and sit in fake branches. As she got older, she loved to curl up under the tree and in boxes and corners. 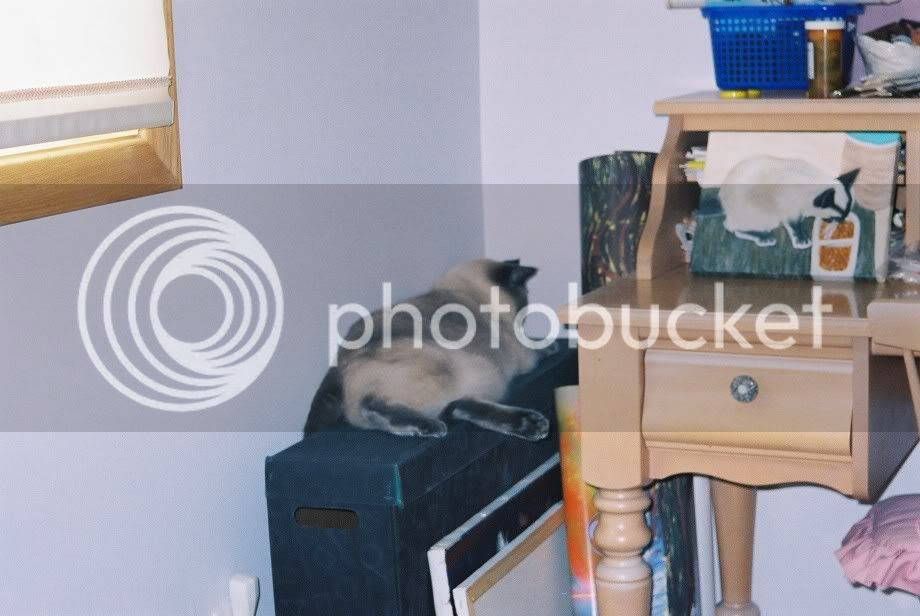 Lately, she took to curling up at the foot of my paintings, which I found funny. I had used her temperament as inspiration for my character Kithara, and her colouring for another character, Joshi, both of Amhelaki Misadventures. The painting she liked was of those two characters. 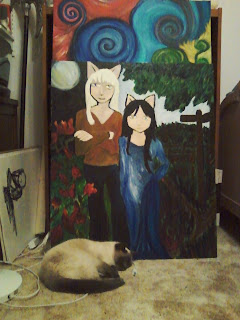 She liked going outside and exploring, constantly getting into places where she shouldn't be. I've caught her sneaking downstairs into the basement, where the cats aren't allowed because of the sewing machines and because we keep it free of cat hair for guests with allergies. It was also routine to check a couple times a day where she was, especially at night. Once or twice, she did let locked outside for the night, but in the morning, she'll be on the porch, sitting on the rockers, waiting. 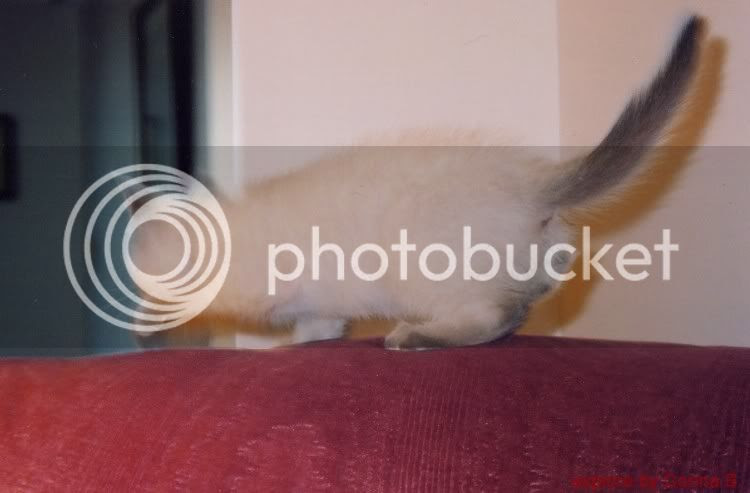 She loved sitting on the patio furniture, or in the flowerbeds by the house when she wasn't exploring the yard. She hunted birds, catching one last june, and bugs. When the neighborhood cats came by, she'd chase them off, but never got into fights. 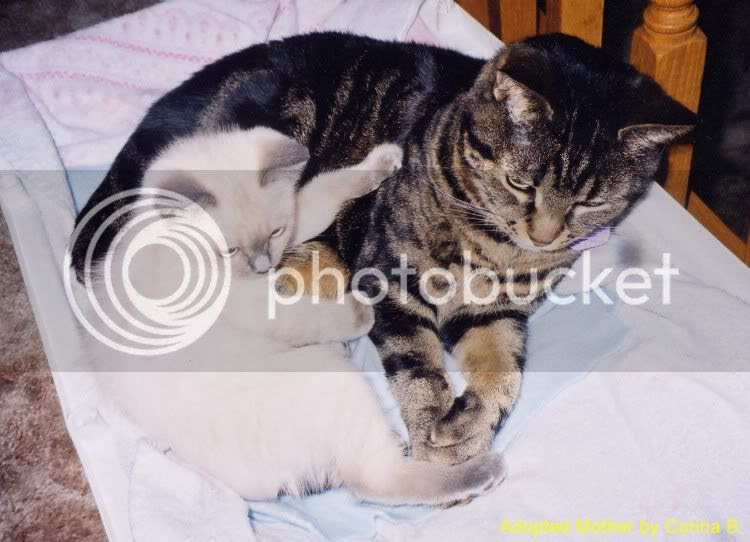 She liked people, loved having attention and being petted, although only when she wanted it. She and dad had a routine; he would sit down to put on his shoes for work on the stairs, and she would circle around him, purring and then crawl into his lap. They would sit there for a while until she would jump off and he would go to work. 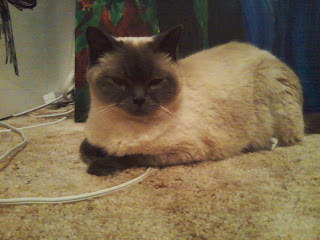 For everyone else, if she rubbed your leg and purred in the kitchen, you could pick her up and cuddle with her, but she fully expected food afterwards. Elsewhere, she's walk away and expect you to follow her to where she curled up. There you could pet and comb her, but not pick her up. She would just wiggle out of your grip, and jump down, or else walk down your back and jump. 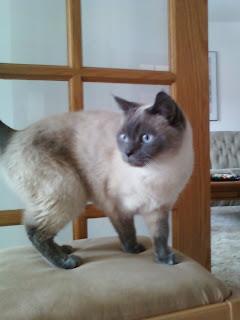 She liked exploring too, would get into the neighbor's yards and then run back when she heard our door opening. Couldn't keep her on a leash or collar; she was double jointed and very flexible, would just slip through it. But we didn't worry, once we found that she knew the boundaries and didn't go near the road. She liked to go out the front door, and then circle around the house to the back to be let in. 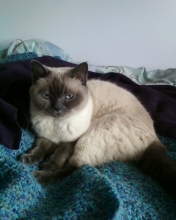 The two times she stayed on her leash was when we took her for walks. Once, to the lemoint point conservation area. She'd walk for a bit, then stop to check out things off the path. Some times we'd carry her, when it looked like she was tired. Second time, we took her on a walk to the convience store for milk. She was doing the same for that, but the way back she walked the entire way, in the lead.

Even though she'd wander the longer she was outside, she always came home. 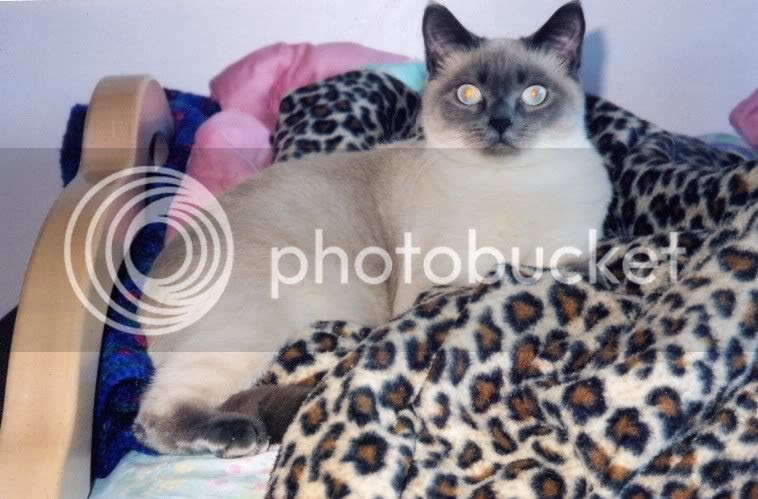 Posted by Corina Becker at 10:30 PM No comments: